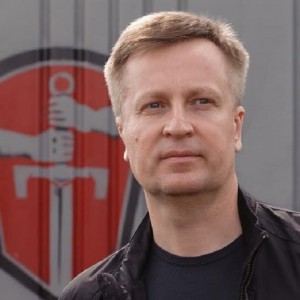 Leader of the JUSTICE Civil and Political Movement

Valentyn Nalyvaichenko (born in 1966 in Zaporizhzhya, Ukraine) is the leader of the Justice Civil and Political Movement (political party, founded in March 2016), and chair of the V.Nalyvaichenko’s Anti-Corruption Movement (non-governmental organization, founded in September 2015).

Valentyn Nalyvaichenko started his civil activity shortly after he was terminated from his post as the Head of the Security Service of Ukraine (SBU) for refusing to stop investigations into the corruption and embezzlement being done by the country’s political elite.

Valentyn’s overarching motivation is to provide a European future for Ukrainian citizens. He is committed to joining citizens together, nationwide, to push the government for transparent investigations and independent prosecutions of those engaged in corruption. As the government has not been able to effectively combat corruption, he is bringing all citizens of Ukraine, from East to West, to find corruption and report it to the appropriate government offices, while keeping pressure on them to act, and not let the accused away free. Today, his Movement is represented across Ukraine and unites over 200 civil society organizations.

Valentyn Nalyvaichenko served twice as the Head of the Security Service of Ukraine (SBU) from 2014 to 2015 and from 2006 to 2010. As the head of the SBU he initiated fundamental reforms to establish European security service, by eliminating “the totalitarian legacy” of the Soviet KGB. Depoliticization and demilitarization of the Ukrainian security service became key priorities for his reforms. Valentyn Nalyvaichenko took leadership in promoting and implementing the Euro-Atlantic strategy of Ukraine. He initiated a joint Working Group “Ukraine-NATO” on military reform. Valentyn Nalyvaichenko initiated unprecedented efforts aimed at restoring historical memory that resulted in declassifying and digitalization of archives of the SBU, and making them available to public. He created special research centers to discover, declassify and release documents related to different periods of modern Ukrainian history, including tragic times of Holodomor (Ukrainian Famine) of 1932-33, Stalin repressions, WWII, Ukrainian Insurgent Army (UPA), repressions against Ukrainian intelligenzia and patriots of the 60-s, 70-s, and 80-s. For the first time in the history of independent Ukraine people could have access to actual cases and files of their prosecuted family members and friends. After the Revolution of Dignity in 2014 he renovated Ukrainian counterintelligence, kept Ukraine safe from terrorist attacks when Russia began war against Ukraine, implemented wide-ranging counterintelligence and counterterrorism reforms, initiated assets recovery stolen by former top-officials as well as investigation of the crimes against humanity, led the investigation of the downing of the Malaysian airliner MH-17, helping to prove it was done by the Russian-backed separatists.

Earlier in his public career Valentyn Nalyvaichenko served as Member of the Parliament of Ukraine (Verkhovna Rada of Ukraine) from December 2012 to February 2014. He was a member of UDAR fraction (Ukrainian Democratic Alliance for Reforms political party) and the First Deputy Chairman of the Parliamentary Committee on Foreign Affairs, chaired the MP Group on Inter-Parliamentary Relations with the Republic of Finland, served as a member of the Standing Delegation of Verkhovna Rada of Ukraine in the Parliamentary Assembly of the Organization for Security and Cooperation in Europe. Valentyn Nalyvaichenko drafted 18 laws and regulations on the issues of transparency of elections, accountability of the government, denouncement of privileges for MPs, simplifying doing business in Ukraine, liberalization of visa regime, opening of borders for Ukrainians and combating illegal migration. Before that he was a chairman of the Political Council of Nasha Ukraina (Our Ukraine) political party from September 2010 till May 2012.

During various stages of his diplomatic service career, Valentyn Nalyvaichenko has held senior positions at the Ukrainian Ministry of Foreign Affairs (MFA). As the Deputy Minister of Foreign Affairs of Ukraine in 2004-2005 he made great progress in liberalization of visa regime with countries of Europe that resulted in Ukraine signing EU-Ukraine Visa Facilitation Agreement, and with the United States, including introduction of the 5 year US visas for citizens of Ukraine. He served as Ambassador to Belarus, consul general at the Ukrainian embassy in Washington from 2001 to 2003, and as a first secretary in the Ukrainian embassy in Helsinki, Finland in the mid-1990s. During the tragic events of August 1996 in Norway, the worst airplane crash in Norway’s history, when over 140 miners of Russian and Ukrainian mining communities of Barentsburg and Pyramiden on Spitsbergen Svalbard had been killed, he served as a key liaison officer between Norwegian and Ukrainian officials on all aspects of investigation of this case and dealing with its consequences.

Vision: Valentyn Nalyvaichenko is committed to fighting for a corruption-free and just Ukraine. He views the Ukraine — US strategic partnership as the keystone for Ukraine’s foreign policy.

Positions: Valentyn’s political persuasion is center-right, and he is anxious to cut red-tape, corruption and bureaucracy in order to create a strong economic climate to help Ukraine grow and become a prosperous country fully integrated into the European community. Integral to national sovereignty, the liberation of Eastern Ukraine and Crimea from Russian occupation is a key priority. Ukraine must seek full-scale membership in the EU and NATO.

Charity and Social: Valentyn actively supports Ukrainian veterans and works to improve the plight of internally-displaced persons.
Valentyn Nalyvaichenko was awarded the Order of Prince Yaroslav the Wise V and IV degrees, and the Order for Merits to Lithuania-Commander’s Cross.
Valentyn Nalyvaichenko graduated from the National Taras Shevchenko University of Kyiv with honors in 1990, majored in linguistics. He is fluent in English and Finnish.
He is married and has an adult daughter.